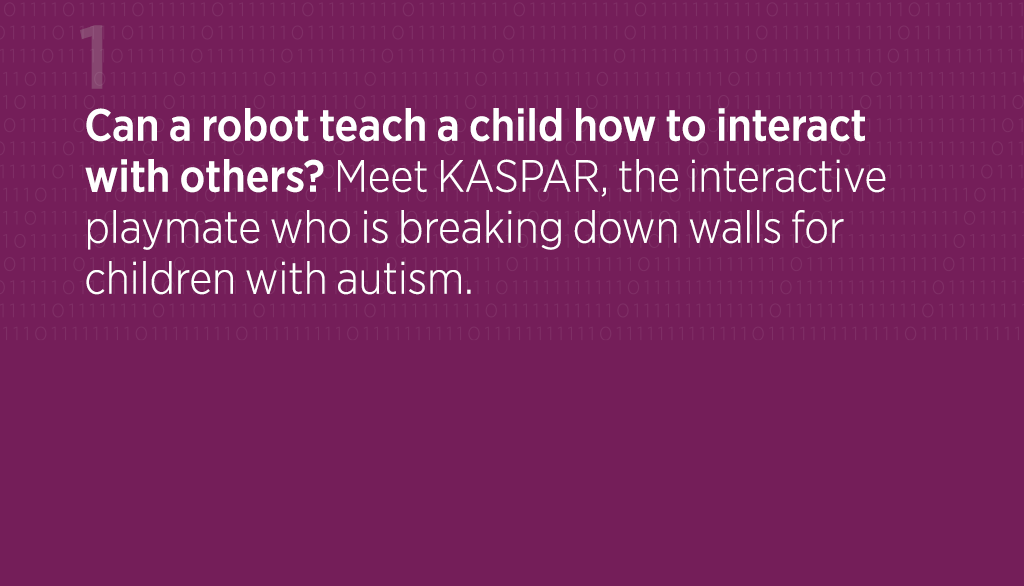 Both parents and teachers agree: Eden has certainly opened up since she met her new friend.

It’s 2011, and the four-year-old is growing up with autism. In the past, she would shy away from contact, and shrink when other girls held her hand.

“Affection always used to be on her terms”, said her mother Claire. “If you didn’t say, ‘Can I have a hug?’ and you just went and hugged her, then you might have got scratched or something. You always had to pre-warn her, whereas now it’s much more spontaneous.”

KASPAR is an unusual-looking friend, a simplified face without wrinkles or crinkles, tucked under a mop of wavy hair and a baseball cap. And it’s true: KASPAR isn’t like other children.

He’s a robot, built by researchers at the University of Hertfordshire. 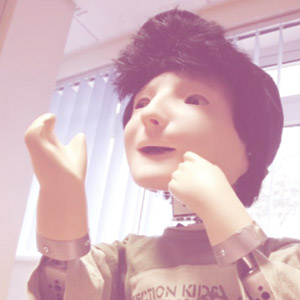 Some adults consider KASPAR a little creepy. He can blink, move his mouth, and gesture with his neck and arms, but his rubbery face lacks the intricate detail of a human face. It is precisely this simplicity that makes him so attractive to children with autism.

“Interacting with other people can be very challenging and frightening for autistic children”, says Hertfordshire’s Dr Kerstin Dautenhahn.

“The range of expressions can be very overwhelming and difficult to process. KASPAR has a very plain face, which is similar to a human face but simplified. By playing with KASPAR, children can spend time learning about human faces, and getting more used to human interaction.”

KASPAR was born in 2005, a minimally-expressive robot prototype developed in just three months. However, the university’s work stretches back to the late 1990s, when Dr Dautenhahn founded an umbrella project called Aurora to investigate how robotics could help with autism therapy. Her work was conducted alongside co-investigator Dr Ben Robins.

“When I started this work, I had many years of experience in social robotics. Autism started as a personal interest”, she said. “When I did some research, I learned that many people with autism were much happier interacting with computers, as they found them safe and predictable compared to human beings.

“I started forming this idea. What if children were able to use a robot to practice social interaction and communication? Robots can be simplified, and can therefore be less stressful and easy to understand. We wanted to show them that social interaction didn’t have to be frightening.”

Once KASPAR was ready, the research group took him into schools, such as the TRACKS autism early years centre in Stevenage.

KASPAR is operated by a teacher or child using a remote control keypad. He is able to play a number of games that help children to explore human faces and interaction. In one game, KASPAR makes a gesture that the child has to mimic, such as putting his hands over his eyes or opening his arms wide.

Autistic children also struggle to determine how to touch others appropriately, often hurting other children by shoving them or pinching their nose. KASPAR reacts happily when he is touched in a friendly way, and shies away obviously when he is “hurt”.

While KASPAR doesn’t learn new behaviours himself, he can be adapted to play games that are tailored to a child’s particular needs. Following suggestions from teachers, KASPAR was programmed to lead the children in song, with tunes like “If You’re Happy and You Know It”.

“You see them a little while later, loudly and enthusiastically singing the song and touching their nose. They’re so happy”, said Dr Dautenhahn.

“If you’re a parent of a child with autism, one of the sad things is that it can be very difficult to play. If you can’t play with your child, it can be very frustrating and upsetting. Can this robot help an autistic child to become closer to their family?”

The research group conducted long-term studies with 80 children between 2009 and the present day, and many parents reported that their children have noticeably softened after spending time with KASPAR.

The work done at the University of Hertfordshire also inspired former doctoral student Tamie Salter to set up her own company offering robotic devices for autistic children. Canada-based Que Innovations is currently trialing the QueBall, a ball-shaped robot which rolls around and reacts to the touch. It is designed for children on the lower-functioning end of the autism spectrum.

Other researchers have noted KASPAR’s effect on children. At the University of Roehampton, Paul Dickerson’s team undertakes conversation analysis to determine how people interact with each other. A study of autistic children who had interacted frequently with KASPAR uncovered some heartening results.

“If you analyse the interactions in detail, you can find instances in which children with autism display behaviour they’re not meant to have”, said Dr Dautenhahn.

“For example, children with autism are meant to be very bad with ‘joint attention’, the ability to have a common focus with someone on another object. But we have seen examples of children doing just that.

“Rather than focusing on what children with autism can’t do – which is well documented – if you let them interact with a robot like KASPAR, you might see surprising things happening. We’re trying to focus on the abilities of children, not the disabilities.”

It has certainly proved beneficial for children such as Ronnie.

His mother Sheena said: “Before, he was always bashing the other children around. It’s calmed him down a hell of a lot. I’d love to have KASPAR at home.”

That dream may not be far off. In August 2012, a two-and-a-half year project began to re-design KASPAR for use by non-researchers, and robots with new hardware will be tested in schools and even houses. The aim is to enable some families to welcome KASPAR into their own homes.

Dr Dautenhahn said: “We’re still in the process of working out how this could happen, but we want to make KASPAR more widely available.

“Some people might be able to buy one, while others might rent one from certain suppliers. KASPAR may not be as expensive as some of those wonderful robots we see in the news, but we know that some families in need might not be able to afford him.

“We’d like to see as many children as possible benefit from KASPAR. We don’t want to see him become an expensive luxury object that only a few people can afford.” 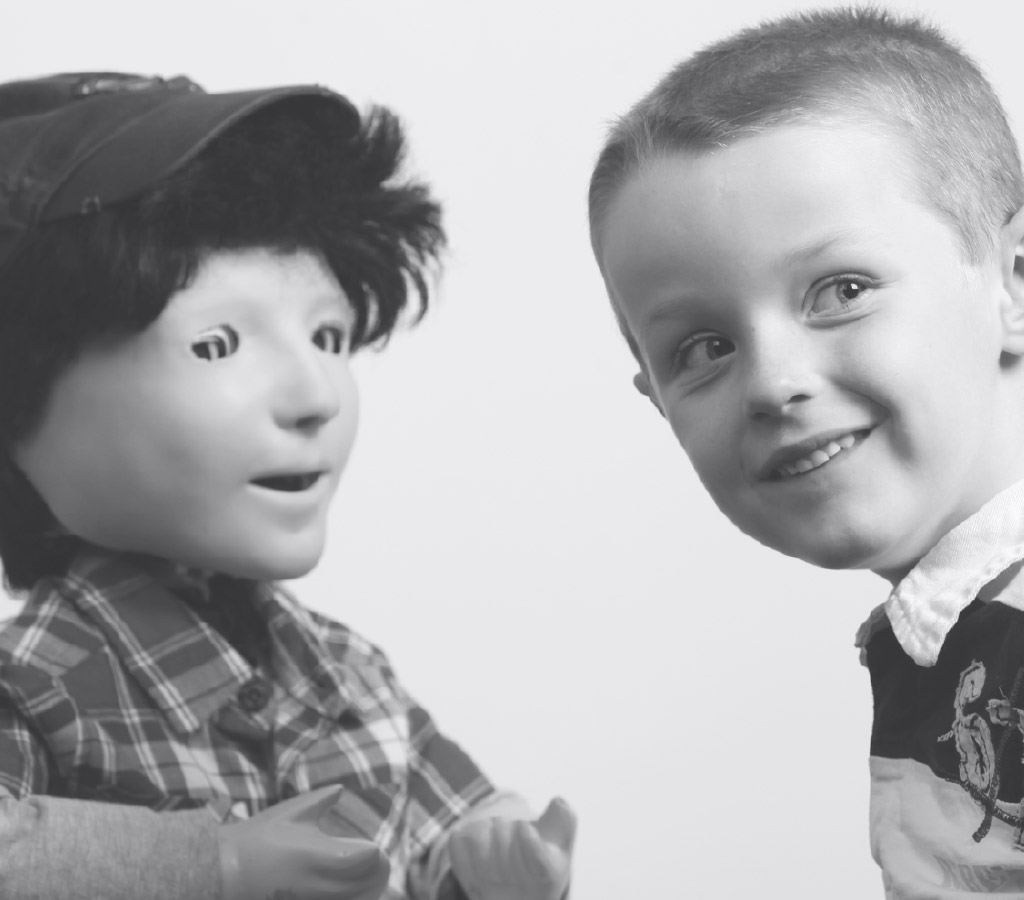 http://cs-academic-impact.uk/kaspar/2015-07-29T15:36:24+00:00Naomi AtkinsonCase Study
Both parents and teachers agree: Eden has certainly opened up since she met her new friend. It’s 2011, and the four-year-old is growing up with autism. In the past, she would shy away from contact, and shrink when other girls held her hand. “Affection always used to be on her terms”,...
Naomi Atkinsonnaomi@naomiatkinsondesign.comAdministratorImpact 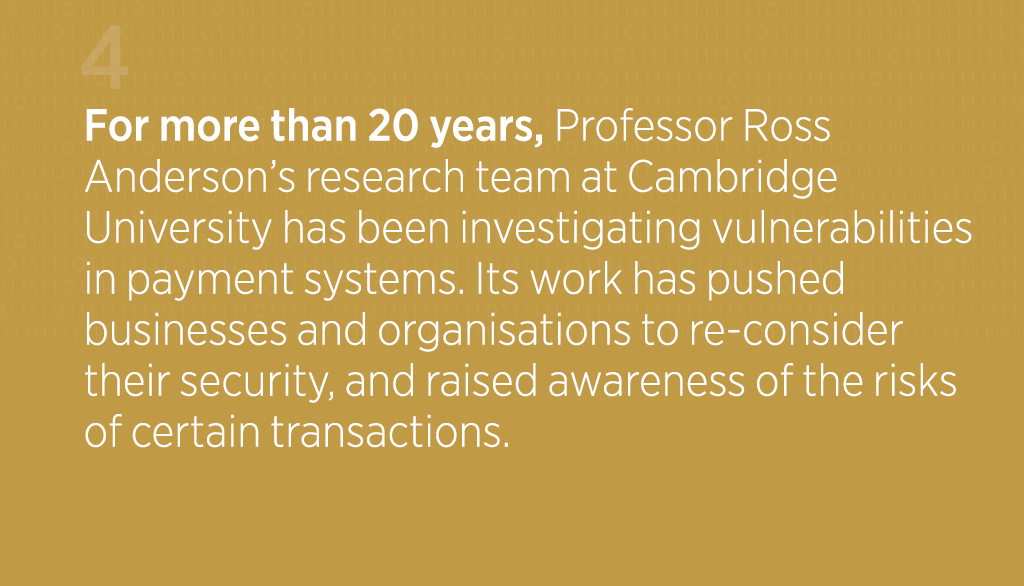